In 2008, our third year of operation, the number of children who benefitted from scholarships from the Foundation has increased from 500 to 868 in the following regions: 555 in Thailand, 133 in Cambodia, 100 in Burkina Faso and 80 in (Tibet) China. In addition to sustaining the education and primary health care of these children, the Foundation has successfully realized 4 major school infrastructure projects: a secondary school in Burkina Faso and a primary school, dormitory and kindergarten in Thailand.   The Foundation has devolved 773507 CHF towards its projects and donations in 2008.  Of these, the equivalent of 99823 CHF came from Singapore Chapter Fundraising Activities and equivalent of 50085 CHF from Fundraising Activities in Italy. Of the total amount spent, 40000 CHF was allocated to exceptional donations to the victims of the Chinese Earthquake and of the Burmese Emergency.   Of the 733507 CHF spent on projects 41% was spent on sponsorships and 59% on school infrastructure buildings.

100% of all available resources has been destined to our projects. The minimal administration costs have been personally covered by private donations of Mr. Pistorio.

In 2008 we have reached 868 children and realized 4 major school infrastructure projects:  a secondary school in Burkina Faso; a primary school, a dormitory and a kindergarten in Thailand.

NIBAGDO, BURKINA FASO
(Partner: CIAI, Centro Italiano Aiuto all’Infanzia) In 2008 the Foundation has supported the education, health and welfare of 100children.  The sponsorship of 475 CHF/child covers school uniforms, materials, books, one meal per day at school, clean drinking water at school, vitamins and mineral supplements, and medical assistance.   The Secondary School of Sogpelcé has been built and will be completed by spring 2009.  281730 CHF, or 2/3 of the cost of the school, have been funded by the Pistorio Foundation in 2008, the remaining will be donated by the Foundation in 2009. The Secondary School opened its doors in October 2008 with 76 students. The school consists of four buildings: a seven classroom building, an administration offices and teacher rooms building, a library, computer lab and workshop building, and director’s accommodation.

To assist in raising funds for the construction of the school, Pasquale Pistorio organized and sponsored (at his own expense), a fundraising event in Rome, Italy, on March 2008 – an art exhibit exposing the works of his spouse, artist Lisa Zanatta Pistorio:  https://www.pistoriofoundation.org/category/news-and-events/ 100% of proceeds from the donations made by the purchase of the paintings went to the Foundation towards the construction of the Secondary School of Sogpelcé.

Volunteers Francesca Ferrari and Paolo Bertolini audited the project in June 2008 and met with CIAI representatives, local authorities, families, communities and sponsored children in Nibagdo, Sogpelcé, and other five villages where children supported by the Foundation reside. Francesca has written an article for the Confindustria magazine in Modena and Il Dito of Catania, available on the Foundation website: https://www.pistoriofoundation.org/press/88.pdf; https://www.pistoriofoundation.org/press/90.pdf

Francesca Ferrari at the Nibagdo Primary School Nibagdo primary school that the Foundation expanded in 2006 adding two classrooms, sanitation facilities, kitchen and hangar, and where the Foundation sponsors the education and primary health care of 68 children.

Secondary School Project in Sogpelcé, catering to 7 villages including Nibagdo

(Partner:  Centro Ghe Pel Ling, Milan) In Lithang, in 2008, we continued to provide scholarships for 80 children who have benefitted from our support since September 2006. Scholarships cover not only school supplies, uniforms, and tuition, but also room and board costs at the dormitory and three meals per day. To support a child’s scholarship in Lithang costs 304 CHF/child per year.   Although communications have been difficult throughout the year (internet and phone lines have been blocked and disturbed repeatedly for extended periods of time) and visits difficult to organize because of the continued unrest in the region, partner volunteer Gemma Randelli has been able to visit the site and witness that school activities have continued undisturbed. All the 80 children have passed with high scores the previous academic year and are continuing their schooling and doing very well both academically and health-wise. 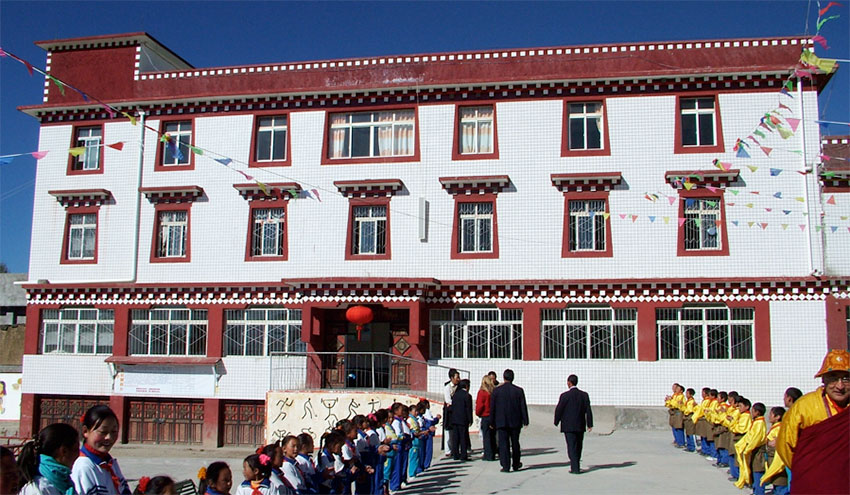 Dormitory in School Campus of Lithang, built by the Foundation in 2006

(Partner: Camillian Social Center, Chiang Rai) In Chiang Rai, the Foundation is supporting 555 hill-tribe children’s education. In Thai public schools children receive one meal per day and regular medical check-ups. Our sponsorships cover uniforms, meal, school materials and books, and in some cases transportation.   Sponsorship varies as some children do not need transport, secondary and professional school is more expensive, and some parents can partially cover some costs such as uniform or meal.

Sponsorship varies on grade level as well, and is on average 222 CHF/child. We have sponsored 555 children from over 10 villages who attend 8 different schools, ranging from kindergarten to professional school.   Infrastructure In 2008 we completed the construction of the BanMhai Pattaná primary school for 200 children and dormitory for 50 children. One third of the school costs (total cost of school 54599 CHF), and the entire construction of the dormitory was funded by Singapore Chapter fundraising activities.  The primary school consists of six classrooms, two teachers’ accommodations, separate sanitation facilities for boys and girls, and a library room and teachers’ room. The Dormitory comprises of two large rooms, one for boys, one for girls, each with its sanitation facilities, and on the ground level a kitchen, refectory, washing area, and guardian accommodation. The primary school is attached to the village of Ban Mai Pattaná and the dormitory serves two other villages.

We also improved school infrastructures in the Mee Nam Khon School (K-12) in the village of Panaseri realizing the following projects: a 4 classroom kindergarten with sanitation facilities; the reconstruction of a roof of one of the buildings; 7 rooms and sanitation facilities for teacher’s accommodations; and an Art and Music school building.  The total budget of these projects was 22766 CHF.

Lino Battan travelled to Thailand in January and March to oversee the construction of the school and audit expenses.  Elena, Carmelo and Yang Ping Pistorio attended the opening ceremony of the school in May.  The school opened with 86 children. Lino travelled once more in November to audit the ongoing project and oversee the construction of the dormitory which was completed in December.   The amount raised by Singapore Chapter in 2008 for the Thailand project was 224489 Singapore Dollars equivalent to 169 404 CHF, of which 99823 CHF was spent in 2008 and used for the infrastructure project of the Ban Mai Pattaná School campus and towards the scholarships for 105 children. The remaining amount will be used in 2009 to support 296 scholarships. 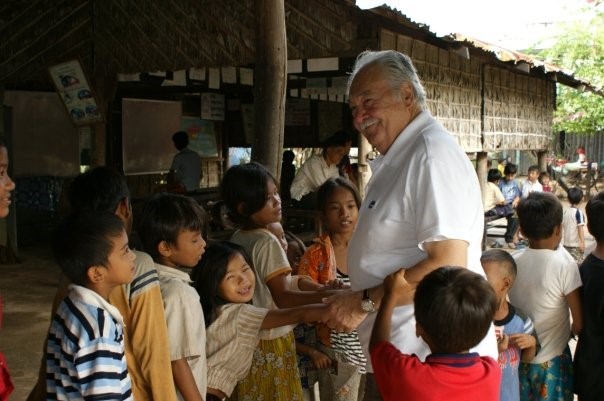 (Partner: PSE, Pour Un Sourire d’Enfants) The Pistorio Foundation is currently sponsoring the education of 133 children at the “Centre de Rattrapage” of PSE. At this center, children follow an accelerated school program to make up for years of education lost: 2 academic years are taught in one. The center covers primary to high school.  The center also teaches traditional dance, theater, and education on children’s rights and values of family, society and culture.

The sponsorship of approximately 666 CHF/child covers school tuition, teachers’ salaries, two meals per day, uniforms, school supplies, medical check-ups, and a ration of rice to families to compensate for the loss of income represented by the schooling of their child.

These children come from families that are laborers at the municipal dump of Stung Mean Chey, and the children themselves were formerly workers at the dump before being rescued by PSE and enrolled at the “Centre de Rattrapage” of PSE.   Elena Pistorio and volunteer Ariane Roulet Magides, have traveled to Phnom Penh to audit the status of sponsored children in February and in November they returned on the location with Pasquale Pistorio and volunteers Angela Mitakidis and Carmelo Pistorio. President, Board Members and Volunteers have traveled and stayed in Phnom Penh at their own expense.

We whole heartedly thank all our donors and sponsors for their trust and generosity.

Donors who have donated above 1000 CHF:

Companies and Organisations who have donate over1000 CHF:
Telecom Italia Sparkle
The Fort Printers
Uluru Aussie Bar and Steakhouse

Event Partners and Sponsors who have donated over 1000 CHF in goods and items for fundraisers:

International Chapters Activities
Italy
Lisa Zanatta Pistorio Exhibit in March – costs of exhibit sustained personally by Pasquale Pistorio – 100% of proceeds have gone towards the Burkina Faso Secondary School Project.
33000 Euros equivalent to 50008 CHF have been raised thanks to this fundraising event.”

For summary on all fundraising events, please visit News and Events 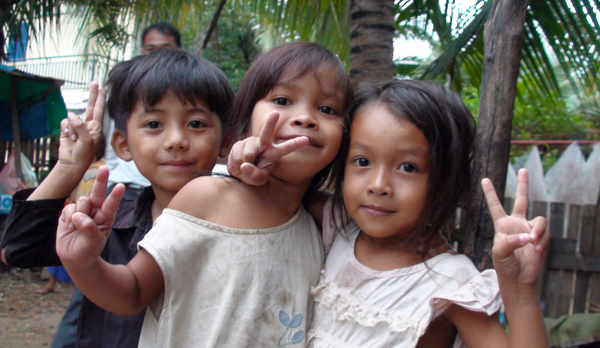