Upon graduating in Electrical Engineering from the Polytechnic of Turin, Pasquale Pistorio began his career in Motorola, Italy in 1967, rising through the ranks to become in ten years Corporate Vice President of the company, based in Phoenix, Arizona, in charge of the International Semiconductor Division.

In 1980, Pasquale became President and CEO of the SGS Group, the only Italian microelectronics company. In 1987 Pistorio led the successful integration of SGS with the French Thomson Semiconducteurs. As President and CEO of the newly formed company, later renamed STMicroelectronics, he developed its diverse product portfolio based on high-growth applications and its worldwide network of strategic alliances that propelled it amongst the top five semiconductor companies by 2001. During these years, the company went public on the New York Stock Exchange, Paris Bourse, and Borsa Italiana. From a government owned, nearly bankrupt company, SGS, making 100 Million in sales, Pasquale Pistorio created a major industry champion that ranked third worldwide and totaled 9 Billion in sales by the time of his retirement in 2005. Pasquale Pistorio also contributed to forge a strong company culture characterized by integrity, pursuit of excellence, and commitment to social and environmental responsibility.

As early as 1993, Pasquale set up a companywide Environmental Decalogue with quantitative targets to reach Carbon Neutrality, making the company within a few years a leader in Environmental Responsibility and winning numerous accolades including the prestigious US Environmental Protection Award for two years, and the European Quality Award. Pasquale received the “Green Hero Lifetime Achievement Award” from AnalogZONE magazine, and in 2002 was nominated voted among the top 50 “Stars of Europe” by Business Week magazine and number 1 in Time Magazine’s “Top 25 Movers and Shakers” list.

A member of the UN ICT Task Force under Kofi Annan, Pasquale founded the STFoundation in 2001, to provide IT Literacy skills and access to computer technology to the most marginalized communities in the countries in which STMicroelectronics operated, by creating computer labs in public spaces and providing Train the Trainers classes. STMicroelectronics was to contribute every year 1% of its revenues and 1 % of its employee working time to run the Foundation. Today, the STFoundation counts over 100 installed computer labs and 260,000 trainees in 25 countries.

Upon his retirement as President and CEO of STMicroelectronics in 2005, he created the Pistorio Foundation, with the mission of serving children in need by giving them back their inalienable rights to education, health, safety, protection, and life. In 2012, Pasquale was honored with the “Ellis Island Medal of Honour” award for his philanthropic endeavors.

Pasquale Pistorio has served as Chairman of Telecom Italia in 2007 and as Vice President for Innovation and Research of Confindustria, the Confederation of Italian Industrialists, from 2005 to 2009. He has been a member of the Board of Fiat and Telecom Italia for ten years. He is currently a Board Member of ATOS Origin and Brembo among others, and Board Chair of XID Technologies.

June 1998 – decorated “Ouissam Alaouite” by the Kingdom of Morocco 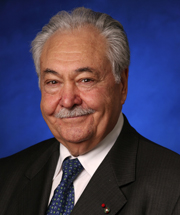